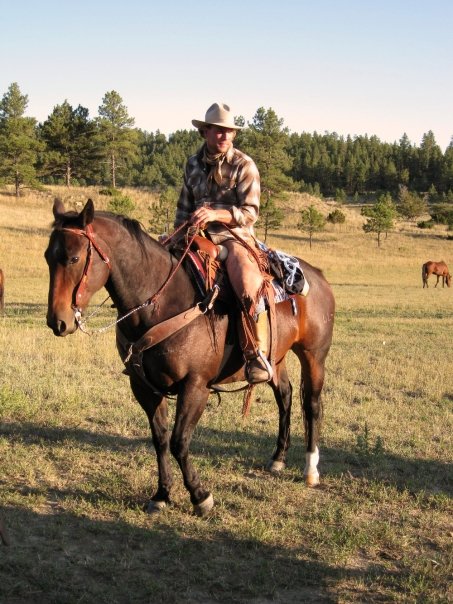 I have dubbed it the horse-trailer effect. ---Although, this phenomenon doesn't exclusively  happen when pulling a horse-trailer.  I have also noticed it when driving while wearing a cowboy hat, or when I have a lariat hanging on my pickup's rear window gun rack. These objects can incite an onslaught of friendly waves from a specific grouping of motorist. Waves from  ranching  folks, cowboys driving pickups with hydro-beds and hay bales. Waves from cattle- order-buyers driving Escalades, wearing Maui-Jims with their multiple- X felt hats.  Waves from the drivers of  Flat-bed 1 ton pickups pulling goose- neck stock trailers with Boarder- Collies balancing between the pickup cab and the hitch of the overhanging trailers. These folks... they will wave ever time they see a pickup  pulling a horse-trailer or one of the other  "Cowboy identifiers".

I know there are other group classifications on the  road.  My wife drives a V.W.  I have noticed V.W. People wave at V.W. People . I have  noticed the low ( tire level) waves exchanged between motorcycle riders.  Jeep Drivers... they also have their exchange of waves. Humans try to identify with like-minded folks. We all have this very humanistic need.

This segues  into the current and assumed inapproachable topic of politics. The United States 2017 is a  nation completely polarized... "waves" between a person not within a "group" have become difficult to muster.  The other night I was  the "victim" of a harmless stereotyping . I was standing in a beer line at a concert staring Shooter Jennings and The Turnpike Troubadours. I overheard 3 "cowboy attired" 20-year-olds-males making fun of the fact I was wearing a cowboy hat with Teva's (sandals on my feet). One of the young men said, "I can't believe even in Montana you now see guys "faking it " ,  the others kid said, "a hat and sandals?phufffff".   I laughed to myself thinking,  I am "Fake News"to them even though  I am twice their age and have most likely been around 'Western Activities' before they had nuts~ much less hair on their nuts.

I walked away  smiling into their conversation.

The previous night I was at an  art opening. I like the "20 year old cowboys", found myself a bit uncomfortable knowing those surrounding me have  "melted  the value system which I was raised". Conservatives within art scenes are as scarce as  flip-flops in the back livestock-pens of the  stockyards.  I have seen  radicalized posts on facebook... and have been have publicly  "countered" when expressing my "posted" opinions... and yet when standing  face to face we mostly  search for benign topics , most of us put on a cordial face. Even with vast political gaps shouldn't  we smile into the conversations contrary to our thinking.  Should we enter conversations in attempts to educate and be educated?

I gained a little something from being critiqued on the topic of fashion by the 3 young "cowboys".  I hope my smiling into their conversation provoked them to view a larger landscape. However, I doubt they gave it a second thought.

The truth is we never really understand the fashion or "life experiences" of other individuals. This alone should be a quelling factor to most discrepancy.  One driver will give a friendly wave to a person they find a "similarity" with... yet road rage can ensue if a driver is supported by a group mentality of disagreement. We live in a fragile world in which peace is impossible.

Howdy Cowboys! Hello Rocket Man! Explain why your shutting down interstates Black Lives Matter? Who wants to be on Top? OH! , most all of us want to be on Top! Interesting! and do we call this human nature? Carry On! Wave as you pass by. Peace Out!